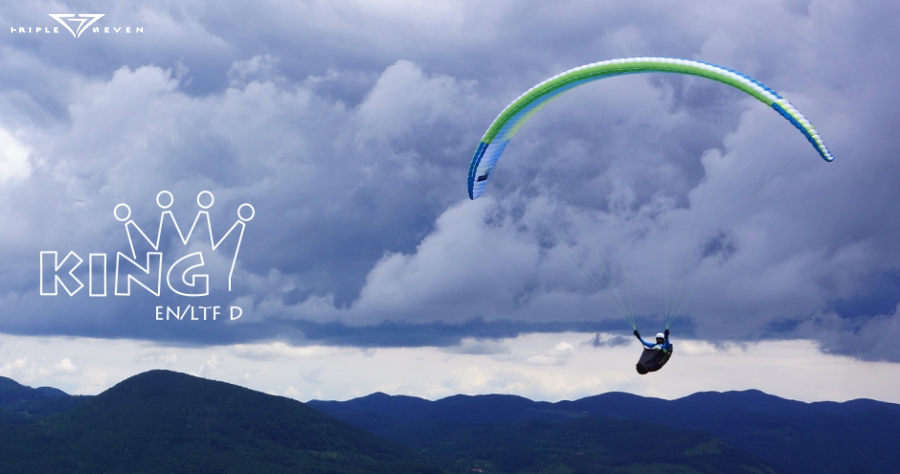 King of The Sky EN/LTF-D
King is a classic three liner wing, placed in D class. During the development of the wing we where able to construct a canopy of clean shape that gives you a pleasant safe feel troughout the wide speed range. The handling is precise and playful yet, when needed, brakes can be pulled down to tighten up the core. The traditional stability of Triple Seven gliders wings is well printed also in the King, bringing a big margin of safety for the pilots in this class.
This wing is the best tool for pilots who take no compromises when it comes to performance flying while obtaining a safe feel trough out the wide speed range. The King trully is the King of the sky.

King proto on the glide from Triple Seven Gliders on Vimeo.

During the designing process my main goal was to produce a wing that will feel very safe in hands of wide range of pilots flying in D class. While using all of the newest technologies, the King proved itself to be a really good performance glider that is capable to cope with turbulence in a very kind manner which made my testing hours a pure joy. The ideas that have been raising on the desk for some time now, reflect in this wing in best possible way. I am really satisfied with the final product and I believe many pilots will be able to benefit a lot from the overall good feel of the King.

Who is the glider for:

King is an EN/LTF D class wing designed for advanced pilots. Its safe feel and behaviour makes the King suitable for very wide range of pilots whilist it is still a classic D class wing with great performance.

We use cookies to ensure that we give you the best experience on our website. If you continue to use this site we will assume that you are happy with it.Ok